There is a trend emerging in design these days and I blame it wholly on licorice. Surely you remember Twizzlers, those twisted sticks of confection, originally available in only red and black. I believe those childhood memories have inspired a new breed of twisted building, full of whimsy and childlike playfulness. 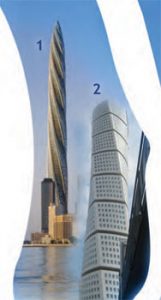 They are emerging on every continent. The Turning Torso in Malmo Sweden, the Infinity Tower in Dubai, the Chicago spire in the United States, the “gherkin” in London, the “pickle” in Barcelona, and the final two towers in a five-tower condo complex called Absolute World in Mississauga—the more curvaceous of the two nicknamed ‘the Marilyn’, and together sometimes referred to as the Marilyns. These twisted sisters all have one thing in common: they are really powerful urban symbols. They are also very difficult to build!

Engineer/architect Santiago Calatrava spearheaded the recent rise of such expressive buildings. He was responsible for the Turning Torso in Sweden and the yet-to-be-built Chicago Spire. Calatrava is uniquely qualified to realize his bold visions. Where architect and engineer are usually engaged in a battle between expressive art and functional practice, Calatrava can resolve these impulses and achieve the most beautiful sculptural results. We can see his work locally at the BCE Galleria on Bay Street in Toronto, where a beautiful soaring atrium shows off his sculptural and technical ability. 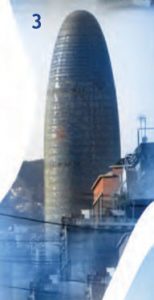 Is this twisted motif a new phenomenon? While it is in the spotlight lately in architectural design, it has been done before. The Baroque period architect and sculptor Gian Lorenzo Bernini created an exquisite papal altar in Saint Peter’s Basilica in 1629. The supporting columns follow a sinuous form, evocative of snakes, supporting a gilded canopy framing the Pope’s high altar.

In the early 20th century Antonio Gaudi designed spiralling towers on his Sagrada Familia cathedral in Barcelona. This was an architect who refused to be tamed by pen and paper, using instead sculptural clay modelling to achieve his visions. He had to train stone masons to abandon the rectilinear block form prevalent in the day.

The constant theme in these twisted sisters is a building that is nearly impossible to build, or even to draw with conventional pen and paper. Enter the computer.

Licorice for inspiration and computers for realization. Sam Crignano of Cityzen Development, the partner developer with Fernbrook Homes, said that every floor of the 56 storey Marilyn was different. Conventional buildings sometimes repeat 15 standard unit plans. Cityzen created a unique folder for all 428 units managed by computer. Each floor plate comprises an oval shape that turns a few degrees on each successive floor. While the oval skin turns, the interior columns and elevator core do not. When the oval of one floor extends out over the floor below, the supporting walls and columns get a little longer or wider, stepping out to support the floor above. As a result every floor is slightly different.

It is a clever technique that respects the traditional method of forming concrete, while allowing for a very expressive undulating form.

A sophisticated computer program was also used to visualize the form of the Marilyn under varying parameters. Yansong Ma, the design architect, tried various transformations, using 1 degree of rotation per floor, changing to 2 degrees per floor, and then introducing more extreme variations to understand the possible sculptural outcomes. He settled on a gentle set of mathematical offsets that produced an organic form  suggesting voluptuous human hips. 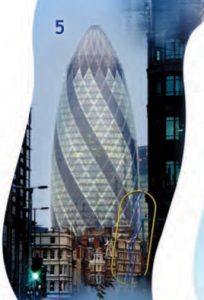 When this original Marilyn was selected through an international design competition, the uncertainty around her constructability caused the jurors to pick a more conventional design as a fall back position. Following months of structural analysis it was concluded that the design was indeed viable. According to Crignano, the costs associated with construction could be offset by a premium price which started at $450 per square foot of unit area. This compared to regional price points around $380 per square foot for similar condominiums. The gamble paid off with the first tower selling out in a month and giving the developer confidence to launch a second similar tower at 50 storeys also designed by Ma. Today there are only a few units left in that tower, selling for $550 per square foot. Everyone was a winner!

There were several variations on the twisted building submitted through the design competition. None were as elegant as the Ma submission. I served on the jury and we were all seduced by the siren’s call of his design and its promise of focal attention.

Since Calatrava designed and engineered his first Turning Torso building in 2001, the world has jumped onto that bandwagon as evidenced by the competition submissions. Poor copies of an original masterpiece do not qualify as new important architecture. If there is a problem with twisted architecture it is that it reads as too mathematical, harsh and structural. Calatrava’s buildings, as ground-breaking as they are, suffer a little from this problem. Ma has successfully transcended that feeling, creating an organic flowing form. That is the true legacy of his work and we in Mississauga are riding on its success internationally.

Tim Jones of Toronto Artscape speculated as early as 2007 that the Marilyn, which was only a design on paper at the time, would be noticed by the world. This past summer the New York Times ran a story about the Marilyn. When in Rome recently I mentioned to a local architect that I was from the Toronto area. He replied “oh, that is where that amazing Marilyn tower is located”. I proudly replied, “No, that is in Mississauga, my home town.” The Marilyn is on the minds of Americans and Europeans. The world is noticing!