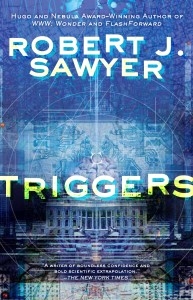 The best thing about reading a Robert J. Sawyer novel is how much smarter I feel after I’m done. Sawyer is a writer of hard science-fiction—that is, his novels are full of rigorous scientific detail. He spends months researching before he starts writing. And, as in his other works, that research is evident in his 21st novel, Triggers.

The book starts off, quite literally, with a bang: an assassination attempt on the president of the United States. He’s rushed to hospital for surgery, and at this same hospital an experiment is taking place involving the memories and post-traumatic stress disorder of an Iraq War veteran. Then a bomb detonates, releasing an electromagnetic pulse that amplifies and scrambles the memory equipment, giving a random group of people access to each other’s memories—which means someone has the president’s memories and is now a threat to national security.

I know—on the surface, that doesn’t sound very science-fiction-y, does it? In fact, the book is written like an action movie. It’s very different in style from his other books, and this is a result of his experience in adapting another one of his novels, FlashForward, to television. It’s good to see him flex some other writing muscles, and continue to do so; his next novel is a detective noir story set on Mars.

Triggers is also much more American in tone than most of his other works—it’s one of the few Sawyer novels set in the United States—but that’s necessary for the story he wants to tell. Certain elements simply don’t work when you set the story in Canada. But Sawyer doesn’t disappoint in loading the book, somewhat subtly, with Canadian content. Triggers has its Sawyer-isms, no doubt: little things like the differences in our systems of measurement, pop-culture references, a none-too-concealed criticism of the prime minister, and of course, the brilliant scientist whose experiment started the whole thing is Canadian.

Triggers is congruent with the best science-fiction in that it’s not about blasters, but about issues and social commentary. Sawyer’s novel falls right into line with the kinds of things he’s always written about: it’s an exploration of a part of consciousness—in this case, memory—packaged in an entertaining story. His prose is as clear and sharp as ever. But he also uses the book to explore issues such as empathy among humankind (a primary concern of the novel) and the brutal trauma of war. Sawyer is a pacifist at heart, and it’s refreshing to hear a voice advocating peace in a genre that often glorifies war.

If anything, I wish there was more in the way of Big Science-Fiction in the book, if that can even be said. So much of it reads like a thriller novel that it sometimes doesn’t have enough of the mind-boggling science that I love about his books. The real science-fiction meat of the story comes towards the end.

However, don’t take that as a serious fault against the book. It was a blast to read—though it made me feel a little strange writing down notes while reading a book about memory. And really, the entire book is centred around an amazing experiment, the results of which are 100 percent SF. It’s an action movie with a big science-fiction finish and an optimistic message.