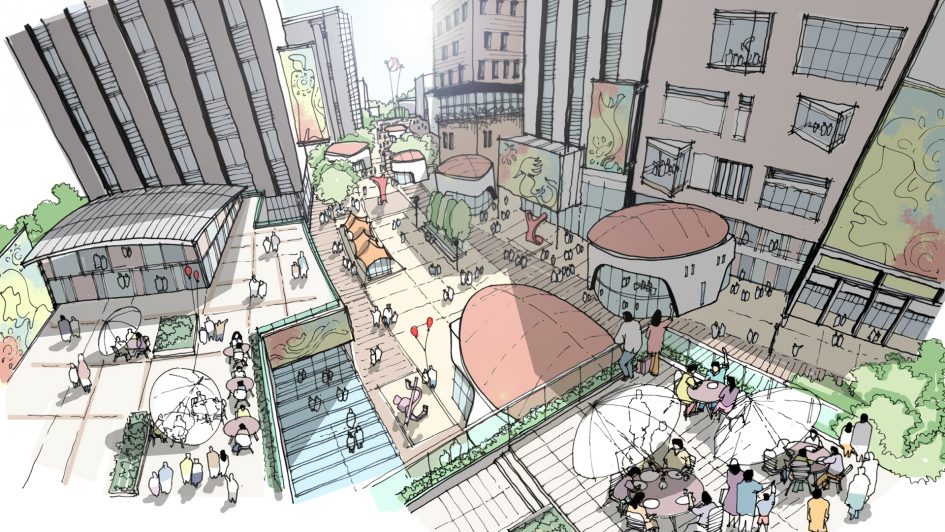 What is the public realm? Let’s break this down (with a little help from the Oxford English Dictionary):

City-building can be characterized as a battle between these two opposing domains of activity or interest: public versus private. In one corner are the rights of the public to reasonably benefit from new city building and development. In the other are the rights of private enterprise to provide in some measure what people want through the milieu of a profitable business model, enforced by our banking system.

My work over the past year has taken me into the hottest corners of this battle for supremacy: the 16th floor of 655 Bay St., a.k.a. the hearing rooms of the Ontario Municipal Board. The OMB. Widely condemned by some in the community as a puppet of the private sector, I have to report that some very balanced mediations and decisions have been flowing lately from this controversial site.

In almost all of the cases in which I am involved, the interests of the public realm have been threatened by those with private realm ambitions. There is too much traffic and noise, loss of daylight and privacy, lack of safety, insufficient planting, narrow sidewalks, excessive height, unsympathetic character and more.

My approach in all cases is to assess how to find sufficient public benefit that corresponds to adequate private benefit. This is an important equation. Development rights are enshrined in zoning bylaws and Official Plans. Public benefit is less prescribed. Public amenity is usually described in less legally binding documents such as Urban Design Guidelines. When these guidelines are tested against Official Plans and zoning bylaws, they usually lose.

The challenge, then, is how do we establish the physical limits of development that enforce the public realm benefits? What are the elements that we should quantify? What contexts demand different standards? The mind boggles at the variety of existing conditions. As a result, we get guidelines and not standards which may be flexibly applied to suit the many contexts.

In an attempt to simplify, I look for a limited set of standards that at the very least establish the following:

These few standards, when comprehensively applied, begin to constitute a kind of manifesto about the future of a community, setting tangible limits to development that should reflect a new planned outcome that respects the public realm under new development pressure. It is a kind of “Rue Future,” the subject of many urban thinkers for hundreds of years.

Street of the Future as imagined by Eug?ne H?nard in 1911 is one of my favourite illustrations. It’s a vision for Paris that carefully considered the public realm. Buildings are limited in height by a 45-degree angular plane that reads “Rayon Lumineux ? 45°” (“light beam at 45 degrees”). Public transit LRT is conveniently located near the sidewalk. Sidewalks are protected with rain canopies. Noxious odours are exhausted to chimneys taking fumes out the roofs of the buildings. Cars (and helicopters) are parked underground out of view. Shops line the sidewalks. Mature trees are shown to the rear of the buildings.

Rooftops have planted gardens. There is one lone person on the third floor who appears to be using a central vacuum system. His vision respects the public realm. Curiously there are no trees or people in the street.

Here is another vision of the future.

In 1913, Harvey Wiley Corbett, an American architect who graduated from Paris’s ?cole des Beaux Arts in 1900, must have seen H?nard’s vision but clearly held shares in General Motors. It is similar except for the intensity of car use on the street. These vehicles have displaced the public realm and pedestrians to the second, third and ninth levels. Contrast this with a recent development proposal in Yorkville where a public park is proposed on the ninth floor. Also consider that an approved proposal for the redevelopment of Humbertown Plaza in Toronto includes three sky bridges. The future has arrived. Corbett at least considered the presence of people in the public realm. There are even two trees on the second level on the right side.

Where does that leave us in beautiful downtown Mississauga?

Here is my formula for the street of the future. Imagine it’s Lakeshore Road, or Burnhamthorpe Road or Hurontario Street.

Sidewalk widths from curb to building face should be a minimum of eight metres wide. Building setbacks will usually need to be three metres to achieve this. Why? To allow for mature tree growth, and to provide ample room for pedestrian concourse plus the possible extension of retail presence—in the form of a caf?, fruit stand, product display, plants, etc. Each of these three components needs about 2.5 metres to achieve sufficient space. The extra 50 centimetres is a variable to be applied to whichever area needs it most. For example, a caf? could use three metres. Of equal importance is lay-by streetside parking, which is essential to support the fine-grained small retail shops that line the main street.

Buildings on our main streets should be no taller than the street width in our densest centres, i.e., H?nard’s 45-degree Paris vision. This may suit the Burnhamthorpe or Hurontario corridors.

Buildings in our historic village centres should be no taller than that described by a 30-degree angle from the opposing building face. This protects daylight, sky view and low-rise heritage character, to improve the public realm. This is a simple formula that ensures the most present and exposed parts of buildings are limited in height, protecting the character of the public realm. The angle would allow greater heights to occur within the angular plane out of obvious view from the public realm.

Provide a public square of a usable size and proportion. This is the fundamental public realm element that animates a community. Originally needed for public hangings and pillories, these spaces build the soul and character of communities. They become the space for music, fairs, festivals and public art.

These simple standards will go a long way to set the boundaries for protecting and improving the public realm in our primary streets.

Michael Spaziani operates MSAi, a Mississauga-based commercial architecture and urban design consulting company. He also serves as an expert witness at the OMB.