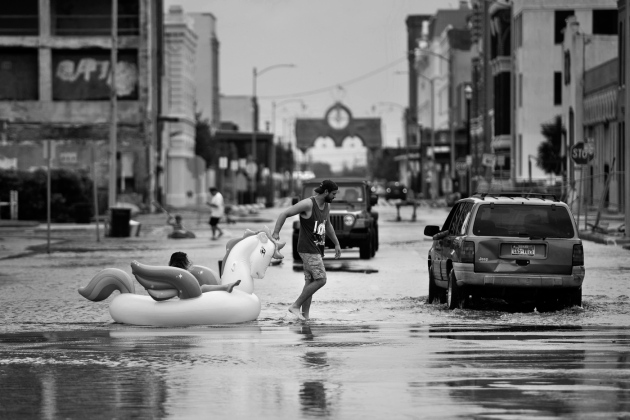 Climate change “might have something to do with it,” admits man unqualified to comment on scientific matters.

Neighbours and acquaintances, as well as the six people who follow his blog (five of whom claim to suffer from “crippling loneliness”), say that Waters is known for calling science linking greenhouse gasses to elevated global temperatures “a lot of namby-pamby pinko unicorn stories.”

But standing in the flooded basement of his home, watching a tricycle floating through a waterlogged collection of Ted Nugent albums with a look of abject depression, Waters admitted he “might have been a little off.”

Adding that he “still hates books and thinking,” the unemployed software engineer says of the GTA’s receiving of more than a month’s average rainfall in one day: “it’s a bit strange.”

“Bud spent 30 whole minutes reading,” says wife, Barbara, 49. “I’ve never seen him do that before. I thought he might have been back on the magic mushrooms.”

A quick look at Waters’s Internet Explorer history revealed three critical Google searches: “why basement so watery like this,” “carbon dioxide atmosphere hoax WTF,” and “how to confess to children worldview predicated on near-medieval ignorance and mounting anger at society re personal failings.”

Climate scientists, meanwhile, are pleased to hear that their views have been ratified by such a renowned non-expert.

Environment Canada Meteorologist Robert Caine has spent the past 40 years conducting arduous mathematical analyses in an attempt to prove that puking vast quantities of toxic chemicals into the atmosphere is, in fact, not good.

“When I try to hug my children, they don’t know who I am and they scream in terror and ask my wife to call the police, but this really makes it all worthwhile,” he says.

Caine says he hopes that, with flash flooding in Mississauga, Toronto, Calgary and elsewhere, more climate change deniers will be motivated to “pull themselves from their zombielike torpor” and investigate what decades of massive overconsumption have done to the Earth’s atmosphere.

With extreme weather events on the rise, he might not have to wait. From 2001 to 2010, Canada experienced the hottest decade on record—temperatures spiked almost three times higher than the global average.

Rising temperatures mean more moisture in the atmosphere, particularly for areas like the GTA, which are temperate in the first place. This means more precipitation. You might have noticed that. Experts say flooding in urban areas is now the most frequently experienced extreme weather event, and that it will continue to escalate, costing $2 billion in direct insurance payments in Canada annually.

When asked whether these revelations will change the way he lives and votes, Waters hummed and hawed. A glassy look entered his eyes, as might happen if a person’s frontal lobe was suddenly attacked by a colony of germ-sized aliens hungry for neurons that have never been used.

For Caine, though, every day brings a new opportunity to change hearts and minds.

“Something like 89 percent of American Meteorological Society Members believe in global warming, and the general population is catching up. I’m confident that, with the evidence more and more on our side, people will soon start actively making the political and personal decisions necessary for the human race to survive,” Caine told us, before falling to the floor, beating his breast and weeping uncontrollably over the futility of human endeavour against the all-powerful force of habit.

Chris Carriere is a writer living in Toronto—and on the edge of sanity.