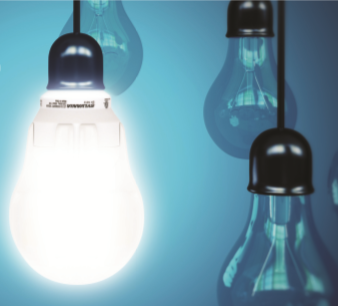 There’s a new way of seeing things—are you ready?

In 2007, the federal government announced that it would raise the standards for energy efficiency, as part of an initiative to save energy and reduce greenhouse gas emissions. This would effectively ban the sale and import of incandescent light bulbs. According to the Natural Resources Canada website, “the regulation sets a minimum performance level for bulbs imported into Canada or sold inter-provincially and will essentially phase out inefficient incandescent bulbs that range from 40 watts to 100 watts.” The old bulbs simply don’t meet the new standards.

The original deadline of January 2012 was moved to January 2014 to allow for technological innovations and to better satisfy consumer concerns. The phase-out starts with 100-watt and 75- watt bulbs, and by December 2014, 60-watt and 40-watt bulbs will be gone.

How They Work
With an incandescent bulb, an electrical current passes through a filament wire, heating it until it’s white-hot, producing light. But it loses 90 percent of its energy as heat, making incandescent bulbs the most inefficient form of lighting available. Halogen bulbs work the same way, but are more efficient; they use about 30 percent less energy to produce the same light.

CFLs use electricity to excite mercury atoms in a tube, which generate ultraviolet radiation. An interior phosphor coating absorbs the UV light and converts it to visible light. LEDs work in a similar way to CFLs: a diode produces light and reacts with a phosphor coating. Both are about 75 percent more efficient than incandescent bulbs, but the big difference is that LEDs contain no mercury. They’re also much more resilient because they don’t have filament or glass components.

“If you were running an LED lamp constantly, it would burn out in six years,” says Amir Sharabianloo, commercial engineer at
Osram Sylvania. “But the average consumer uses a bulb for three to four hours a day, so an LED can last for about 18 years. You don’t need to generate as much electricity to meet the demand, which in turn means you burn fewer fossil fuels. Plus, fewer burned-out bulbs will go to landfills. It’s a sustainable source.” And you’ll save money.

Health and Safety Concerns
CFL bulbs don’t explode or start fires. “With anything that has circuitry, there’s a chance of overheating,” says Colleen Applebaugh, communications and marketing services manager at Osram Sylvania. “But if that should happen, it would be contained to the circuitry of the lamp. Our research and testing has provided no evidence of explosions or open flames.”

But the elephant in the room is mercury. There’s only a tiny amount of mercury in a CFL tube—about the size of a pen dot—but it’s still a cause for concern because it’s highly toxic. Cleaning up a broken CFL bulb is a little complicated (e.g., ventilate the room, don’t use a vacuum) and when it burns out, you can’t just throw it away but you can recycle them at specialty locations such as the Battleford Community Recycling Centre, Rona or Ikea.

The Future
It was recently announced by the government that halogen incandescent bulbs would be allowed. While CFLs are efficient, the concerns over mercury and the extra clean-up/recycling efforts could well prove to be a deterrent, despite the lower price tag.

Also, not all incandescent bulbs are off the market. Rough- service bulbs and appliance bulbs are manufactured for specific uses and there are no energy-efficient alternatives as of yet.

It seems that the future of home lighting lies in LEDs. “These new lamps are true retrofits,” says Sharabianloo. “They produce the same light output as the older lamps. If you have an existing fixture, you don’t need to replace it—just swap the bulbs.” And LEDs will only get brighter and come down in price. Says Sharabianloo: “Over the next three to five years, we’re going to see a huge improvement in the efficacy of these lights.”