House in My Pocket: Sheridan

Our city is full of interesting history from the various hamlets and villages which made up the area long before it was known as Mississauga. The pocket of Sheridan is comprised of three distinct neighborhoods: family-friendly Sheridan Homelands, where long-time neighbours become life-long friends; quaint Sherwood Forrest, where walking amongst the majestic, towering trees takes your breath away; and Oakridge, which offers up some of the city’s most expensive and lavish real estate.

Some very famous Canadians past and present have lived in this area over the years, including the unforgettable Oscar Peterson. Presently, you can sometimes see a famous hockey commentator at the local gas stations sans the flamboyant suit jackets.

Sheridan’s Past
Sheridan was first known as Hammondsville, named for storeowner William Ranson Hammond. However the name was similar to another village nearby, so in 1857 it was renamed Sheridan, possibly for playwright Richard Brinsley Sheridan.

Hammond House, built in 1866, is situated on 2.1 acres of property in Sherwood Forrest. To this day, it remains occupied as a single family home. The property has been designated under the Ontario Heritage Act.

Sheridan’s population peaked in 1877 at 100, but by 1907 it was down to 50. All that remains today is the Sheridan cairn, a marker containing the names of many families who once lived there. It was constructed in 1986.

Sheridan the Location
Sheridan is a mature, established area with great local amenities and easy access to bike trails, public transit and the highway. Geographically it covers a large area, which is why its eclectic types of homes make it desirable for anyone, from first-time buyers to palatial estate owners. Its boundaries are the Oakville border to the west, the QEW to the south, the Credit River to the east and Dundas Street to the north.

Sheridan crosses two City Wards. Sheridan Homelands is situated in Ward 2 and is represented by City Councillor Pat Mullin, while the remaining part of this pocket is in Ward 8 and represented by Councillor Katie Mahoney. Provincially, it’s represented by MPP Charles Sousa and federally by MP Stella Ambler. It’s also home to the Sheridan Science and Technology Park, an industrial development research community of 2,700 scientists, engineers and technologists. 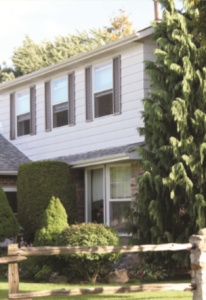 Let’s all move to: Sheridan
Sheridan as a Real Estate Pocket
Sheridan Homelands

Teresa Pamatat is a seasoned Realtor® and is Past-President of the Sherwood Forrest Residents’ Association. Care to share something about your pocket? Contact [email protected]