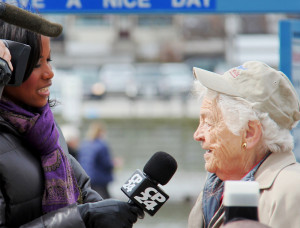 1. She’s partied with Regis Philbin. In 2009, Regis was performing at Casino Rama when he spotted Hazel in the audience, recognized her, and beckoned her onstage to perform a rendition of “You Made Me Love You,” later appearing onLive with Regis and Kelly. Does anyone else feel that iTunes is sorely wanting for a celebrity duet album with Hazel? Marshall Dane, Billy Talent, are you guys reading this?

2. Hazel is likely not the world’s longest-serving mayor, although she’s frequently been touted as such. Hazel’s been serving since 1978, but according tothis report, both Raymond Legace of Atholville, New Brunswick (serving since 1971) and Bill Thake of Wesport, Ontario (serving since 1968) have her beat. Now, on the other hand, Atholville has a population of approximately 1,300, while Westport is just over 600. Mississauga’s population, meanwhile, is over 700,000—greater than at least 30 of the world’s fully-incorporated nations. (Austria also has a mayor that’s been serving over 50 years—but, again, in a small village.) Queen Hazel?

3. She is, however, (likely) the oldest. Until she passed away in 2010, it was Dorothy Geeben of Ocean Breeze Park at 102 years old. Mayor McCallion is now almost certainly the oldest mayor in the world.

4. Hazel attributes her astounding health to a Depression-era diet of wholesome, chemical-free organic food, as well as exercise and activity. Check out this video and skip to 3:06 to hear her talk about her habits. Pictured earlier in the video: Mayor McCallion presenting Rob Ford with a large fish.

5. MississaugaLife’s publisher, Mike Douglas, on Hazel: “What’s so exciting about Hazel is that she makes everybody around her feel younger. She is the ultimate argument against anybody who’s inclined to say, ‘Oh, I’m too old to do that.’”

Warm birthday wishes from everybody at MississaugaLife, Hazel.