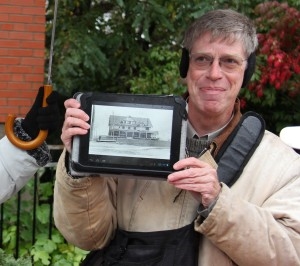 I wasn’t expecting anyone to show up. The main deck of the Port Credit lighthouse offered some shelter from the downpour, but I was about to call it quits.

Then Helena and Frank of the GTA West Outdoors Group showed up in raincoats, ready to follow me on my tour of Port Credit’s main street. Frank organizes the group’s walks. Ellen Timms, Marion Morewood and Trevor Gordon from the Port Credit BIA arrived with a handful of umbrellas to hand out. The BIA has been the kind sponsor for these historic walking tours.

Before I knew it, about a dozen people were on board for the tour, including an intrepid commuter from Grimsby. Looks like Port Credit is getting a good reputation in Ontario as a great destination stop. Soon after, Mike Douglas showed up to snap the photos you see here. Thanks, Mike.

So we set off on our journey through Port Credit’s downtown. Many historic buildings still survive on this busy main street. Our first stop was the Dominion Public Building. You probably know it better as the Port Credit post office, although it hasn’t been a post office since 2008. The original 1931 section of the post office was designated as a heritage building earlier this year. A new office building (much needed in this village) is going up soon, where red brick extensions to the post office were added in 1954 and 1966. The developer is going to restore the exterior and interior of the historic section as a public space.

We also talked about the Lake View Inn, which used to be behind the post office. It was a place with a bad reputation, especially during prohibitions days when the owner—a former boxer turned mob boss, Joe Burke—dispensed booze when the Port Credit police force (consisting of one officer) wasn’t looking.

Our group diverted for a moment from the main street to walk up Stavebank Road. Two of my favourite heritage sites are on this road. A few years ago, Scott Smith, owner of the Pump House Grille, removed an old false wall along Stavebank, uncovering the window of the former taxi office, with the company’s phone number in gold-leaf lettering. Crescent Taxi adopted its name from the village’s phone exchange. Residents today with a 278 exchange would have had a CR-8, or “Crescent 8” exchange in the ’50s. The letters “C” and “R” correspond with the numbers two and seven on old dial phones. At the time I thanked Scott for keeping the historic window in place. He could easily have replaced it with a new window with his own restaurant’s name, but he knows how important heritage is in defining Port Credit’s unique character.

The radial car from Long Branch used to end its run at this point along Lakeshore Road. Before it was a taxi office, the Pump House Grille was Garnham’s Confectionery and the waiting room was here for commuters on the electric railway line.

Our group stopped to talk about the historic Shaw family home that still stands at 19 Stavebank Road North. By this time the rain started to come down hard, so Ellen suggested that we take shelter at the Second Cup—a historic building on its own, once home of the Montgomery family, and later became Robertson’s store. The BIA supplied the warm coffee (hot chocolate, for me) and the staff tolerated our loud enthusiasm as we looked through a collection of photos of Lakeshore Road stores taken by Marg Naish from the ’50s and ’60s. Marg’s father, Adrian, ran the Credit View Dairy. It’s now Roc’n Doc’s, which used to be Mississauga’s first gay bar. How many of you remember Buttons?

Customers from other tables joined us as the chatter grew louder and more opinionated. In the warmth of the coffee shop we mused not only about Port Credit’s past, but about its future. Historic buildings are being preserved. But there is also a growing trend towards bringing more employment into the downtown core. The more people who work in the village, the more lively the village main street will become. The harbour, of course, is also an important point of entry into the village.

The rain let up, so we decided to continue the tour. I was just about to lament to the group about the store where one business, Modern Hairstyling, had been since the ’60s. It had just recently closed but we were greeted with good news: workers were inside, fixing the place up for a new business opening soon at the same location; and it’s a barber shop! Tradition thrives in so many ways in Port Credit.

Finally, with the wind picking up and the temperature dropping we made a retreat back to the lighthouse. On the way, we stopped by the Port Credit Emporium on Port Street. There we chatted with Karen. Like many, she’d like to see Port Street as a second main street that’s a bit more pedestrian-friendly than Lakeshore Road, taking advantage of the view that the fittingly named street offers of the lake and the busy harbour.

It was after 1:00 in the afternoon when we got back to the lighthouse. The tour ran long. That’s what happens when you get an exuberant crowd. When I got home, I had sore feet. Then the sun came out!