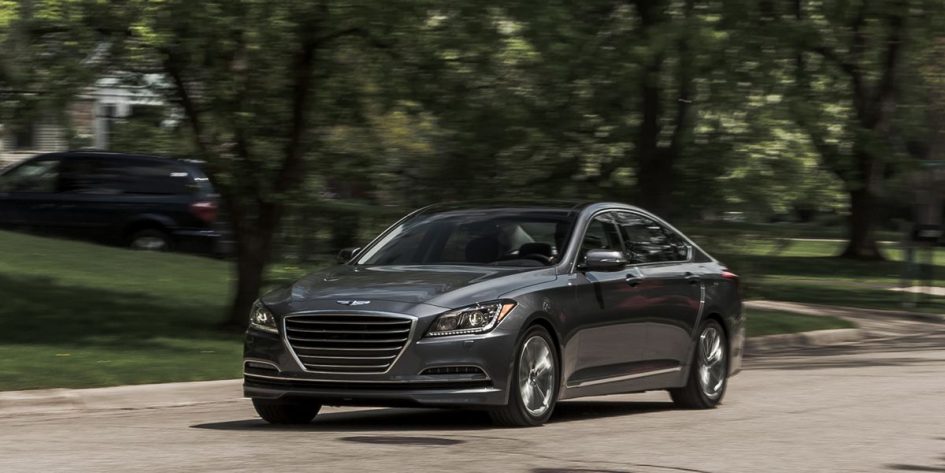 It’s hard being the underdog: All the odds are against you, nearly everyone’s put money on their favourite, the Rocky theme song continuously plays in your head. Honestly, I think it’s harder for the other side where you’re expected to win, and anything short of that will be seen as a colossal failure. The underdogs, even if they lose, are no further behind than they were heading into the situation.

However, the Miracle Mets of ’69 did it. The 1980 Men’s US hockey team, and the famous “Miracle on Ice” did it. Apparently David did it when he fought Goliath as well.

And now, Hyundai’s 2015 Genesis sedan is making a strong case to be held in contention with the other luxury sedan champions.

Not fully known yet for their luxury side, Hyundai to me, has gone about building a case for itself the right way. After carefully losing their poor reputation through the ’80s and ’90s, the past 10 years have been great for the Korean automaker in Canada. Well built, affordable, quality Hyundai’s are all over the streets—from the Accent to the Sonata, to the Santa Fe. And while version 1.0 of the Genesis showed up in 2009, the second wave shows a full redesign with tons of luxury, premium features and build quality.

Even with the winged logo, it’s hard to believe that underneath it all, it’s still a Hyundai. A damn fine Hyundai at that.

With a starting price of $43,000, it’s easy to see Hyundai’s method of offering equal, or more for less to put the fans of the German brands into the Genesis.

Powering my 3.8 Technology trim were 311 horses via a V6 motor and an eight speed automatic transmission.The body shape is sleek and simple. Yes, there are smooth lines and appropriate curves but it’s the subtlety of how they’re incorporated that enhance the elegance of the Genesis.

I could use this entire space to talk about the top quality craftsmanship, attention to detail and the tech heavy aspect of the Genesis. There’s just so damn much of it!

Here are some of the highlights available on the Genesis:

Hey if you’re going to play with the big boys, you don’t bring a knife to a gun fight, right?
In fact, the Genesis can easily hold its own in a segment dominated by longevity amongst its competitors.

While there are many great aspects to the Genesis while it’s standing still, putting it in motion is where you’ll feel its complete offerings. The push button start allows the conservative yet powerful roar to escape the engine. The comfortable 16 way leather seats will keep you in place as you navigate the Genesis through city and rural paths. Steering-wise, I’d go with a solid A-. It’s not easy combining a luxury sedan with crisp steering, as sports cars are more accustomed to. For what the car is, the market it’s targeting and what you’re getting for the price, it’s still impressive.

The straightaways are smooth and powerful. Winding roads are a showcase for the 18” wheels to pair with the strong handling capabilities to cut through and keep you in your seat. Even city driving, with stops and starts galore seem better in the Genesis.

The only deterrent for this car could be your ego. Are you willing to exchange a German logo for Hyundai’s wings? Perhaps Hyundai is being proactive by swapping out the italicized “H” for symbolic wings to separate themselves from what they’re known for.

Either way, the Genesis should be held in contention in the luxury market, even if they’re the dark horse.