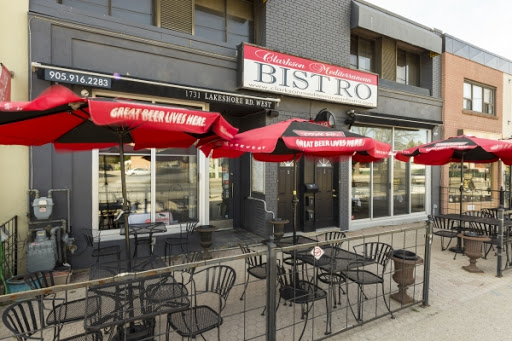 Mediterranean at its finest.
Words by Tara Pepper

Bobby and I haven’t been out to dinner in quite a while. We wanted to try something new and decided on Clarkson Mediterranean Bistro. It’s located in the heart of Clarkson, inhabiting the same space the great Solara once did on Lakeshore Road West. Would it be any good? Could it compete with my memory of one of my favourite places in Mississauga? Read on.

When we arrived, dinner was in full swing. Bobby had made a reservation and we were offered our choice of tables. The restaurant has two distinct sides: one with a view of the semi-open kitchen, and the other is the cozy bar area. Although I would have preferred to watch the kitchen, it was quite loud on that side that night so we chose a quieter table on the other side. We were seated quickly and our drink orders were taken while we perused the menu. I was excited by all the choices for appetizers and mains; I’m sure anyone can find something to suit their palate.

The Winterlicious prix fixe menu offered three courses for $30; an incredible value, I think. I couldn’t decide what I wanted so I waited for my cocktail to arrive while I thought about it. I asked for my usual Grey Goose martini—shaken with a twist of lemon—but our waiter, Kevin, came back to tell us they were out of it. How could an upscale restaurant be out of Grey Goose? I thought. But Kevin was quick to offer Ketel One as an alternative, and I found that it was just as good as Grey Goose: cold, very smooth and delightful ($12). Bobby had an olive martini and he agreed.

Kevin listed off an impressive lineup of specials for the evening, and after much deliberation, we decided to share the seafood platter for two ($30). While we waited for it to arrive, a plate of bruschetta was presented, teasing us as to what was to come. It was incredibly good: crusty, toasty bread with a nicely spiced tomato and onion topping—even though tomatoes are not at their best this time of year.

The restaurant is approaching its two-year anniversary in March. It’s a very comfortable space (great for group gatherings, I imagine) and once the larger table beside us cleared, Kevin suggested we move over to it to make space for our seafood platter. How big could a seafood platter be? I wondered.

I got my answer: it was huge, piled high with smoked salmon, mussels in a slightly spicy and garlicky tomato sauce, butterflied and grilled shrimp with that char I love, and tender and tasty lightly dusted calamari, all accompanied with zucchini and red pepper. What a fantastic mouth buzz I got from that tomato sauce! It paired beautifully with all the different seafood elements and also with the deliciously doughy bread that replaced the bruschetta.

But wait, there’s more! The scallops arrived on a separate plate; Kevin said they take longer to cook, so they are always served on the side. Yum!

I could have easily stopped there, but we still had wine to drink. We chose a Cesari Amarone ($75) from the impressive, reasonably priced wine list ($36–111); it paired wonderfully with the seafood and tomato sauce, so we knew we were going to enjoy it with anything we ordered for our mains. I decided to have the roasted rack of lamb ($30) crusted with grainy Dijon and crushed pistachios. It was cooked medium-rare as I requested, and the accompanying apricot mint sauce was scrumptious. The roasted potatoes also deserve a mention: crispy on the outside and creamy on the inside. Bobby opted for the Chilean sea bass ($29), which was buttery and flaky with just a hint of lemon in the sauce, keeping it moist and delicious. He also asked for mushroom risotto on the side—just because he could—and it too was impressive; the rice was cooked perfectly and had a deep mushroom flavor.

Neither of us had room for dessert but once Kevin described the chocolate cheesecake ($7.50) made by souschef Alex, I had to try it. I love cheesecake when it’s dense and creamy, and this was simply divine. The chocolate and cheese were a match made in heaven paired with the last few sips of the Amarone. What a wonderful meal!

If you’re looking for a great local dinner place, venture no further than the hidden gem of Clarkson Mediterranean Bistro. You’ll be very happy you did!