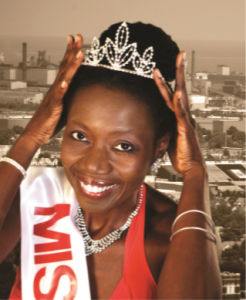 The first time I met Camille Turner, she handed me an audio recording device and asked me to stand in the middle of Celebration Square and close my eyes. “What do you hear?” she asked. “How does Mississauga sound?”

Last May, Turner led a Sonic Walk tour of City Centre for the Art Gallery of Mississauga (AGM). Armed with an audio recording device, she led the group up Living Arts Drive and invited us to keep our ears tuned for various sounds: nature, a pulsing rhythm, and my personal favourite, signs of alien life. It was a Mississauga that has long existed, but I had never noticed.

Re-contextualizing Mississauga is key to Camille Turner’s work in the City. Invited by the AGM to become the City’s first-ever Artist-in-Residence, Turner has defined her residency as “having a conversation with Mississauga.” She wants to discover the City’s hidden histories, engage with residents and learn “what makes Mississauga tick.” Turner defines her work as “relational art,” a term coined by French art critic Nicolas Bourriaud to refer to artistic practice catalyzed by “human relations and their social context” rather than created in “an independent and private space.”

The artist has been exploring Mississauga as well as researching the City’s history for almost a year. She finds herself particularly drawn to strip malls. In contrast to Square One, which is featured prominently in many of the City’s tourism materials, strip malls have largely fallen under the radar of recorded history. “The people who work there have such interesting stories,” she says. “No one knows about them, but these stories form part of the history of Mississauga itself.”

AGM Director/Curator Stuart Keeler recalls seeing a Mississauga strip mall for the first time and being reminded of Mumbai by its ad-hoc aesthetic. Mississauga, Keeler says, has what urban designers call a messy vitality. A reason for this is the variety of diasporic communities who reside in the City, each of which is creating their own distinct mark on it. It’s this plurality of voices that Turner aims to engage with during her residency. “I want to talk to people who have just moved to Mississauga,” she says. “I also want to speak to people who have lived here their whole lives. They all have stories to share.”

She wants to learn the hidden histories of the city. With a particular interest in diaspora and black history, she has been working with Heritage Mississauga to research these aspects of the City’s history. “Where are the women?” she asks. “Where are the people of colour? What happened to their stories?” 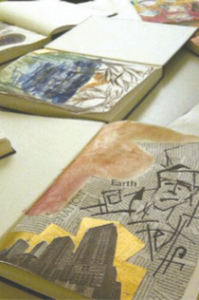 Turner’s first project as Artist-in-Residence is (un)settler, a community journal project that aims to create a written record of contemporary Mississauga’s hidden histories. Twenty community journals are being circulated among community groups and businesses, and Mississauga residents are invited to participate. “(un)settler is envisioned as a pluralist documentation of residents’ thoughts and ideas of Mississauga,” AGM Engagement Officer Tina Chu says. “The project invites people of all ages, gender identities and worldviews to contribute their lived experiences of the City and to get to know the layers of life for their neighbours from one end of Mississauga to the other. It asks hard questions and seeks critical answers as a catalyst for future discussions: what is the identity of Mississauga and who decides this identity?”

For Turner, the discussion is even more important than the answer. She invites Mississauga residents to fill a page in one of the journals, but more importantly, to look at pages other people have filled and begin a conversation.