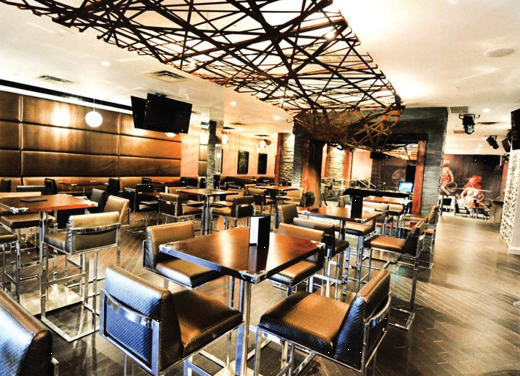 Since December 2011, the corner of Enfield Place and Kariya Drive near the Sussex Centre has housed a restaurant/nightclub Mississauga almost didn’t know it needed: &Company Resto Bar (&Co). Spirit of the City recently visited &Co to chat with co-owner Nader Marzouk and marketing manager Leith Kingsley.

For over a decade, Marzouk has worked in the nightclub promotion business, teaming up with some of Toronto’s biggest venues. He’s lived in Mississauga since 1981, and has always found the city’s lack of choice in quality clubs—and the hassle of going to Toronto—frustrating. So he figured he’d provide the city with what it was missing. And it worked. “I hear it from guests all the time,” he says. “They tell me, ‘I feel like I’m downtown—this is awesome!’” The venue has hit such a resounding note that people from all over the GTA, including some Toronto Raptors and Blue Jays, are showing up.

The concept is that while any place can have good music and good food, unless you’re in good company, you don’t appreciate it. Hence the name “&Company.” This versatile space has two floors, a capacity of 450, and primarily but not exclusively attracts the 26-to-35-year-old crowd. &Co also hosts corporate events, weddings or anything you can imagine. 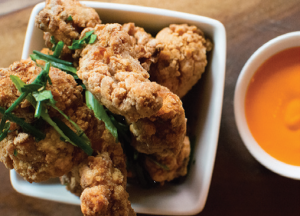 “That’s all by design,” says Marzouk. “The entire space can be transformed, and was built to do so.” You can see this change in action from Wednesdays to Sundays, as the venue subtly transition from dining to dancing.

Aside from its wide selection in music (including DJs who spin Latin, acid jazz, acoustic, Top 40 and more), &Co owes much of its success to its seasonal menus, which favour sharable dishes over traditional entr?es, a credit to the skill of head chef Rob Lussier. When you go, you’ve got to try their addictive signature dish: Crack Chicken. It’s the kind of dish you’ll keep eating even if you’re seriously full—it’s that good.

Another thing &Co boasts is a fabulous rooftop patio; one of only two in the city. It’s sheltered and roomy, and perfectly positioned to offer a great view of the city centre. It’s an inviting space, bound to be a destination spot for warm summer nights. Imagine seeing the fireworks at city hall on Canada Day from that comfortable patio, drink in hand. Maybe we’ll see you there?

From the menus to the music, there’s a great deal of passion in this place, which Marzouk and Kingsley credit to their wonderful team. “We love Mississauga,” says Marzouk, “and we’re heavily invested in doing something unique to elevate its level of entertainment. This city deserves it.”

Check out &Co’s patio—plans are to launch the summer season with a lamb roast!