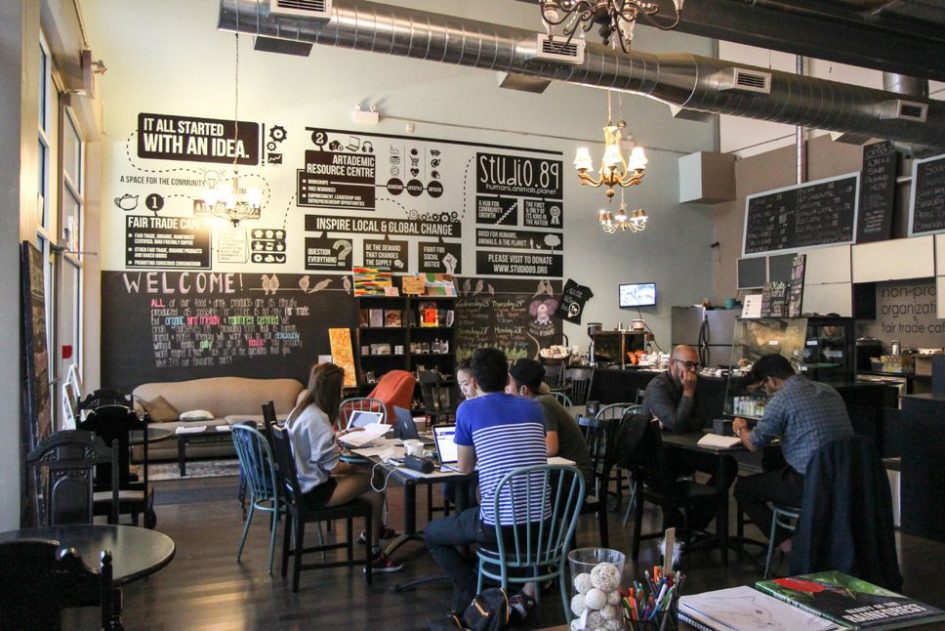 Words and photography by Jeanylyn Lopez

In a newly built plaza near Eglinton Avenue and Tomken Road in Mississauga, there’s a special place called Studio 89.

There is a welcome feeling about the spot. It’s like the extension of a living room with comfy beige couches and tables where people of all ages can meet and collaborate. It’s a community hub and resource centre, with free arts and academic workshops. Another appealing aspect of the place is the caf? which helps fund the “artademic” centre.

In the caf? section of this communal space and sitting in front of a large chalkboard wall, you’ll find Studio 89’s manager Zehra Abbas, whose vibrant personality and passion for social justice can animate a room and motivate action in others. And that’s exactly what the 31-year-old did when she created this space, where residents can get involved with the community and educate themselves on local and global issues.

Abbas was only a child when her interest in social justice began. “I went back to Pakistan and there were children on the streets running around without shoes,” she says. “I couldn’t reconcile in my head why I was taken care of as a child and had shoes, and other children didn’t.” Abbas went back and volunteered in Pakistan after she graduated from high school, instilling in her an even deeper commitment to social justice.

Although Studio 89 has only been open for six months, the movement began nine years ago after Zehra had a conversation with her sister Yumna and her friends on a number of local and global issues.

“They were talking about immigration, the disconnection between the younger and older generation, and poverty, both locally and in developing countries,” says Abbas. “They wanted answers, and they were confused. This was a light-bulb moment for me, because I realized that many people feel this way but don’t know how to address it.”

Thus, despite being close to entering the working world after graduating from Sheridan College in advertising, Abbas decided to start the Youth Troopers for Global Awareness (YTGA) in 2006, a website where young people could address social justice issues through creative writing, visual art, theatre and spoken word.

As YTGA grew, it eventually led to the opening of Studio 89, a non-profit social enterprise centre and caf?. The coffee shop provides fair-trade, organic bird–friendly and forest-certified coffee along with delicious treats with vegan, gluten-free, dairy-free and egg-free options.

Through their caf? they fund their artademic resource centre, a mentorship program which is a combination of arts and academic learning where peers can exchange their skills. Whether it’s guitar lessons or learning to edit pictures with Photoshop, they’ll help you find a mentor.

Every week, the studio also holds a variety of events open to the public, including filmmaking workshops, documentary nights, reading groups and yoga, plus literary, charitable and cultural events. Studio 89 is a space that provides free resources to the community, including offering their space after hours to various organizations for events.

While running Studio 89, Abbas gets to meet people who care about the community and are interested in initiatives happening on a local and global scale—this, she says, is the best part of her job. “We have people who come here as part of an organization who want to get involved, but some people do their bit just by buying their coffee from us rather than the bigger chains.”

In the future, Abbas hopes to see different versions of Studio 89 throughout Mississauga, with each caf? reflecting the needs of its community. “I find social justice issues are complex, multi-dimensional and intertwined,” she says. “I just want to do what I can to make the world a better place. With whatever steps I’m taking in my regular life, I hope to be walking towards assisting an injustice in some capacity, however small it may be.”

Jeanylyn Lopez is a journalism student at Sheridan College and recent graduate from U of T. She also loves sports and is a huge Toronto Raptors fan.