We all know it. The commercialism of Christmas is out of control. I think Christians have a point when they say “Keep Christ in Christmas”—after all, Jesus’s name is right there in the holiday and he’s being forgotten. Although I notice those same Christians have done nothing about keeping the celebration of the Norse god Thor in Thursday, which is named after him.

I’m taking a step back this year. I’ve announced to all my friends and family that I will be giving only love to them this holiday season and I will not be elbowing my way through the Square One Target trying to get a rare toy, or lining up at Birks to buy my wife some beautiful gold jewelry that she would love, but I would know was only bought because it was expected of me. My kids are older now, the youngest being 12. I think he’s old enough to suck up a Christmas morning with a big high-five from Dad instead of some Xbox game or even much-needed socks, right? High-five for Christmas son, high-five! 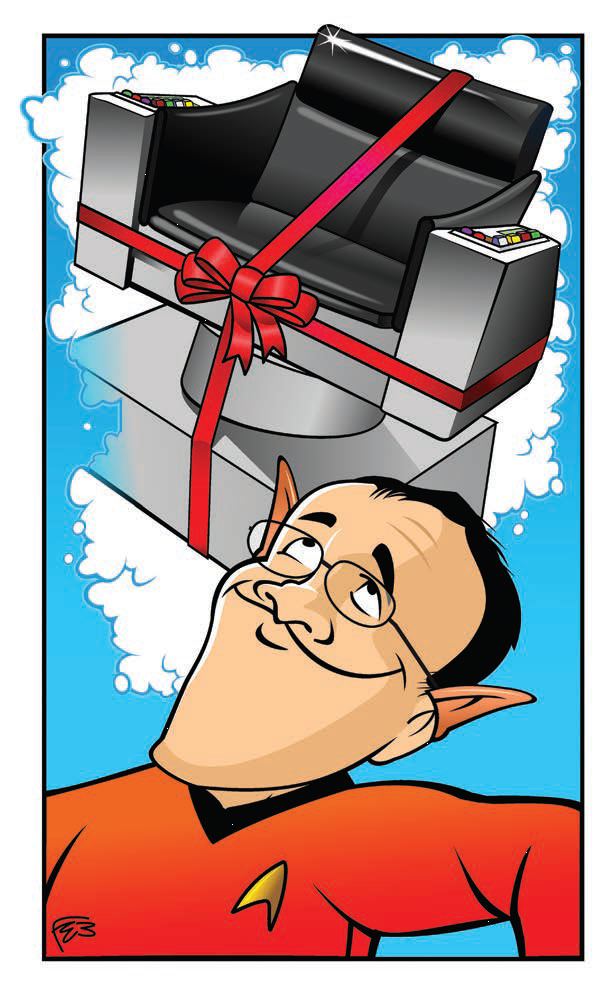 But look, I don’t want to be like a vegan at Ribfest, or the only Conservative senator who isn’t exaggerating his expenses, making everyone else feel uncomfortable. I’ve announced to my family and friends, so that they can enjoy Christmas, that they may continue to buy gifts for me. I don’t just suggest it, I insist on it. I’m not out to spoil their fun.

With that in mind, I have a few suggestions to help them out.

OK, the number-one gift for me would be the Captain Kirk Starship Enterprise replica chair that is available online for just over $6,400. This isn’t some toy (although the buttons do light up and make noises!); this thing looks exactly like the one William Shatner used as he commanded his way from planet to planet, punching bad buys and smooching sexy green space princesses. I would like to use the chair to watch—now pay attention—folks, a new 84-inch Sony flatscreen TV! It’s just $24,999. Canadian dollars. Shop locally and save!

The last thing on my list isn’t a thing at all, it’s an experience. There are so many valuable experiences in life that are actually free. This one isn’t. I’d like Saturday night Platinum tickets for the Leafs vs. the Habs. I found some on a resale site for under a $1,200. Each. This smaller gift would be great to come from my kids. I know they can’t afford five tickets for our whole family to go. Kids, just get a pair, and I’ll take a friend from work.

I hope this makes it easier for my friends and family at Christmas. Feel free to get together and pool your resources. I never stop thinking about how to make things easier for other people. That’s what Christmas is all about.

Gary Pearson is a TV writer for This Hour Has 22 Minutes. His new romantic comedy e-book Slapshot of Love is now available at Amazon.ca and Amazon.com. Follow him on Twitter @captainpearson.