Being Cool with Change

Let’s reach an age of reason. 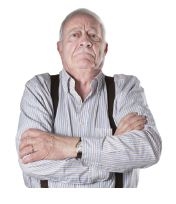 I’ve often wondered why it is that old men frequently come off as angry and bitter when they put in their two cents’ worth at public meetings. You know the guys—the ones who send you home shaking your head after a particularly salty tirade invoked around any discussion of change. It makes me wonder just where their inner cool went.

As I slide rapidly towards age 60, it’s finally becoming clearer to me. This insipient anger is the direct result of confronting a mad, mad world and feeling there is little we can do to outwit the forces of stupidity and irresponsibility swirling all around us in the public sphere.

Eventually we all must take some ownership for the madness around us. It is simply not good enough to pretend things were better, easier or wiser in days past or with bygone policies. They weren’t. The harsh reality we cannot escape is that just as we have learned that we reap what we sow, the truth is that we also must live with the consequences of failing to weed that garden after that sowing has been done.

Metaphors aside, it’s tough to accept the fact that it’s simply not good enough to sit back and say nothing until it all goes sideways on someone else’s watch. We are always haunted by someone’s errors of omission—sometimes our own. Policy making is more than just a spectator sport.

In this edition, Mike Douglas tackles a story about the Canada Lands Company (CLC) and its proposed Master Plan for the marina lands in Port Credit. Owned for decades by Fisheries Canada and leased to Port Credit Harbour Marina, a private business, this land ended up with CLC several years ago. In essence, CLC has the mission of converting real estate assets owned by the federal government into profit. To do so, it investigates options for redevelopment and then, if needed, it employs its heft, resources and persuasive powers to create development “entitlements” (e.g., zoning and density upgrades) which make the property more desirable for (typically) private sector investors.

In this case, the CLC has just put its proposed plan into the hands of City officials who in turn will guide it through a public process for feedback in the months to come. Generally a proponent as powerful as Canada Lands might expect to get the treatment it asks for.

Unfortunately, CLC is like many agents in that its grasp on historical context, or concern for the relevance of that context is limited by self-interest. It should not surprise us if the vision a middleman presents is biased more by its own determination of “highest and best use” than by the feedback it collects or doesn’t collect from other stakeholders and the public at large.

No one can accuse CLC of going on the cheap. They had an impressive array of consultants. They did prior consultation with public opinion leaders in advance of a series of well-promoted and well-attended public meetings. At those sessions, CLC presented well-developed imagery and certainly came across as seeking feedback. Yet somehow, as illustrated in Mike’s piece, their proposed Master Plan vision fell well short of the mark for many people—particularly among those who know and understand the role and requirements of our unique deep draft marina and its significance to the class of boaters who rely on it. Evidently many people felt the process gave short shrift to issues like tourism, the appropriate balance between residential and commercial uses and the conditions necessary to keep the marina operation viable. One could draw the conclusion that the process only went far enough to avoid derailing CLC’s reconceived view about how to maximize its revenue from the sale of this redevelopment site.

The good thing about the CLC process is that it opened up an important dialogue. If we seize the moment to invest our time and energy in working towards the right solution now, perhaps we can avoid years of battle followed by inevitable regret down the road. If we get the vision right now, we just might avoid future recriminations from angry old guys at public meetings. That would be a welcome relief!

Let’s just be cool and deal with change the right way, the first time.