The new Chair is just like the old Chair.
Words and photography by Mike Douglas

Imagine a series of council ballots measuring several of the most outstanding leaders in the two biggest suburban cities in Canada. 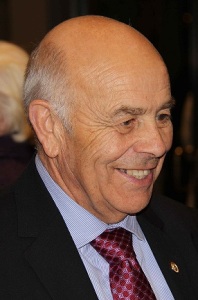 The “race” for the Chair of Peel Region has been quietly underway in an ascending degree of intensity over the last month and along the dais, leaders, colleagues, supporters and family would twist anxiously as members of the 24-person council stood or sat depending on their wishes for the fine candidates for their consideration through five ballots before hundreds of municipal and comm

On December 4 at the Mississauga Convention Centre, the inaugural meeting of Regional Council for the Regional Municipality of Peel voted on their new Chair after the retirement of the only Chair most residents have never heard of. Emil Kolb, the low-key, friendly, former farmer and Mayor of Erin, served as Chair of Peel Region for 23 years and is retiring happily after a lifetime of public service.

Chair Kolb leaves a legacy of competency that Councillors have grown very happy with. Their preferred Chair has been their mentor, friend, guide and enabler, there to help them without forming any political profile of his own.

Although the job gushes with real and potential complexity, for Mr. Kolb the way forward in life was simple: “My father told me that I should come into the world and leave it better for my son than I found it. That’s what I try to do: help.” He smiles and a young staff colleague comes forward, tears in her eyes, seeking to hug him goodbye. 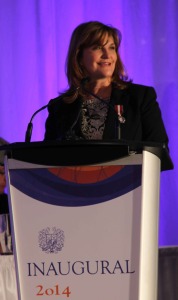 After a variety of strong, well-considered and stirring five-minute speeches of nomination and seconding from various Councillors, each of the five candidates presented their distinct approaches in well-conceived messages that identified their real strengths and the nuances in their respective approaches to the same job.

After the first ballot, Shelley White, the engaging and successful young CEO from the United Way of Peel, promised an enthusiastic, compassionate shot in the arm for the Regional Council. The sole outsider narrowly came last and was dropped from the list for the next ballot.

Long-serving and distinguished City Councillor for Ward 2 in south Mississauga Patricia Mullin resigned her seat on Council to turn her attention to securing the Chair of The Region. She resigned from Council in part to avoid the expense of a potentially necessary by-election. An acknowledged budget expert and regional conservation leader, Ms. Mullin spoke earnestly and from the strength of deep experience and dedication and the Councillors all know that. But her approach was not what was wanted and she became the second name to be dropped from the list of candidates. 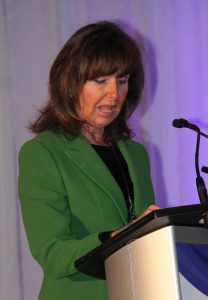 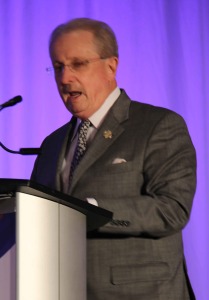 During the recent municipal campaign in Mississauga, Ms. Mullin supported Steve Mahoney for Mayor, and in a dramatic twist of fate, he would slip ahead of her into third place.

After the next round of Councillor voting, Mahoney suffered an ill-fated setback of his own: tied for second with former Brampton Councillor John Sanderson, their names were placed into a bowl, and the name drawn by the Region’s Clerk was Sanderson’s. 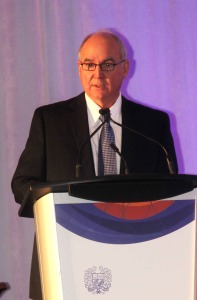 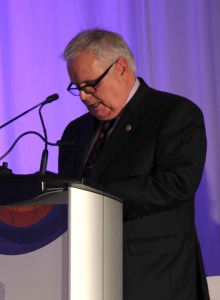 Mississauga’s Frank Dale would square off with his opposite number from Brampton, two quiet, humble, hard-working and experienced Councillors of high integrity. Can we recess, the mayor of Mississauga requested. Councillors voted against it and they voted standing in order as the audience gasped: 12–12, another tie!

The tie mandated a 10-minute recess while the Councillors including mayors caucused and attendees stretched, shook their heads and checked to see if the snacks were ready. It was after 9:00 and no one had eaten.

Ballot number five saw Frank Dale, 26-year Councillor for Mississauga’s downtown Ward 4 appointed to be the fourth Chair of Peel Region for the term of 2014–2018.

Afterwards, Mr. Sanderson was disappointed that a few Brampton Councillors had voted for Mr. Dale and it brought to mind words from the Region’s opening prayer, cited earlier in the evening: “we should save ourselves from the parochialism that divides.” It appeared there is tangible comfort that in Frank Dale, the Councillors had voted for the even-handed and experienced competency this Council has come to be comfortable with.

Some Councillors were unhappy about the resulting necessity to commission a by-election in Mississauga, estimated to cost $400,000, while most in this thoughtful crowd felt it most important that the Council got the Chair it wants. 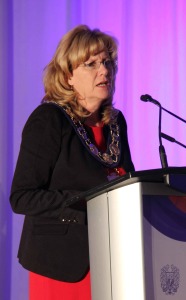 When Brampton’s Mayor Linda Jeffrey called for the next Chair’s election by the public for this most important position, I shook my head no—this was too important to our good operation to trust it to the public.

Based on what unfolded here, with the charismatic and most popularly engaging speakers set aside in favour of the most humble and dedicated performers, it prompts consideration that “the public knows best” sounds wrong.

The Chair of this board is designed to work for the board, and through them, the public—not the other way around. It’s a Chair that serves, rather than leads. If it works, why break it?

Check out the full photo album from this historic event on our Facebook page!