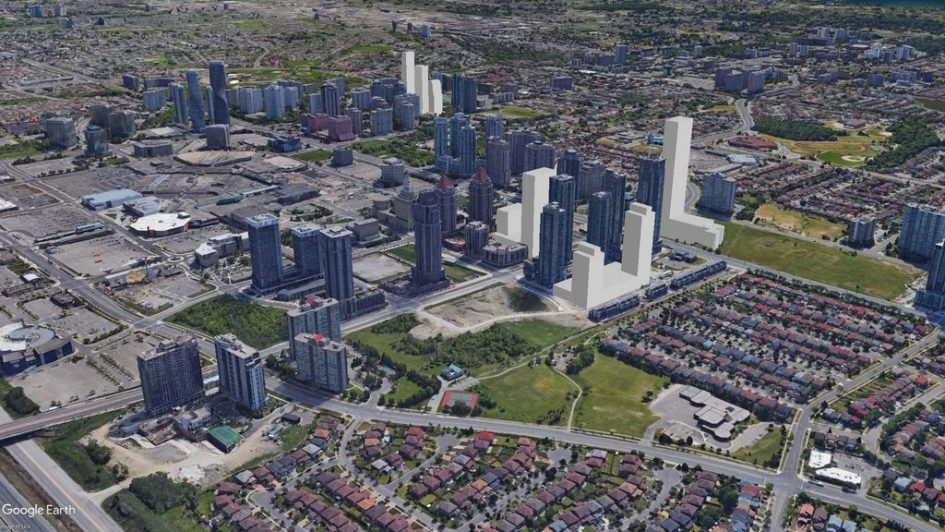 1. The Absolute City Centre Complex (Link to Street View)
This complex made up of five towers has drastically changed the outline of the city centre. Initially one single elliptically formed tower was planned, but after the curious structure was well-received, the construction of a second one began. Absolute World 1, nicknamed the Marilyn Monroe Building because of its curvaceous form, has an architectural height of 178 metres, with 6 floors below and 56 above ground. The second tower, also built in an expressionist structural style, is 160 metres tall with 50 floors above ground. Both edifices are the tallest skyscrapers in the city, and serve as apartment buildings.

2. The Chicago of Mississauga (Link to Street View)
Located in the heart of the city, the Chicago was built between 2008 and 2010. It is the 13th tallest building in Mississauga, with a height of 120 metres, having 4 floors below and 36 above ground. This postmodern building located on Prince of Wales Drive houses residential condominiums.

3. Widesuites Homes (Link to Street View)
Construction of the 20th tallest building in Mississauga began in March 2008 and took three years. Located in the centre of the city, close to the Absolute World buildings, the Widesuites is a 108-metre tall block of flats, having 35 floors above and 4 below ground.

4. The Onyx Building (Link to Street View)
The 106 metre tall concrete edifice was added to Webb Drive in 2010, very close to the centre of Mississauga. The apartment building with its 36 floors doesn’t only offer a home for a large number of residents, but also features a stylish rooftop terrace.

5. An Ultra Ovation in Burhamthorpe Road (Link to Street View)
The Ultra Ovation edifice is situated in the new core area of the city, adjacent to the hub of Mississauga. The building was constructed between 2007 and 2009 and is the 24th tallest skyscraper in the Canadian city, with a height of 102 metres. With a total of 35 floors, the Ultra Ovation houses residential condominiums.

6. Changes on Kariya Drive (Link to Street View)
The two new buildings on Kariya Drive have successfully altered the outlook of the central street. The 101 metre tall skyscraper and its twin building were constructed between 2007 and 2010. They are both used as residential condominiums and are close to the main green areas of the city, Stonebrook Park and Mississauga Valley Park.

7. North Shore Condos (Link to Street View)
Located very close to the waterfront and St. Lawrence Park, the North Shore building was completed in 2011. It has 22 floors above ground and a height of 72 metres. It is one of the tallest high-rises in the city, built in the last 10 years.

For more information on Point2Homes, visit their Canadian subdivision at point2homes.com/ca.